Football: The sport I have played the most is football. One day, during

my second year in Liger school, I heard my coach, Jeff, said that  our

team would have a big competition with a lot of schools in one day. I

went to tell my coach Jeff, “I wait a long time to play in the football

competition Jeff.” Jeff replied back, “You need to make this simple and

you need to practice a lot to be a winner”.

I started  to do like Jeff told me. When the big competition day came, I

woke up in the morning with a smile on my face and my father said, “This

that can make you strong.”

I came to school.  Then my school bus started to drive on the road to one

schools, like iCAN school, Northbridge school, CIA school and other

schools. Before we played we needed to listen to the referee tell us when

we would start to play.

My team started to play with one school called CIA. We beat them. I shot

one goal and my friends named David and Chhoeu shot two more goals.

My team could go into the next round and we won one more game.  I shot

two more goal in another game, so I had a total of three goals.

penalty kicks. Next time we need to practice more. When I came home I

felt tired and went to sleep. This football competition made me like this

I like football because this sport shows me a lot of teams work and I can make  a lot of friends.

For example, I met my friend named Jaime and he met me

a lot of times when I played in football competitions. Jaime, he came from

iCAN school and he shared a lot of ideas about how to win with me.  He

favorite thing in football that I will not forget. Also, this football sport, it

makes me healthy and more good. 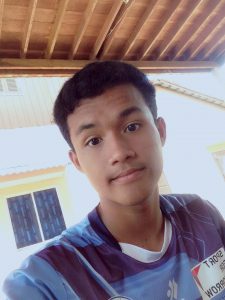 Liger Leadership Academy students are English Language Learners. They have been immersed in English for over five years but are still developing grammar and fluency. At Liger, we pride ourselves on prioritizing process over product. Please excuse any English errors as part of the learning continuum our students have taken over the years.

Hello! My name is Vitou, known as V2 by my friends and teachers, and I was born December 4th, 2001 in Kandal province. My new residence is Liger Leadership Academy in Phnom Penh, Cambodia. I have studied at Liger for five years and this is my first year in high school. Even though the material is more challenging, I never give up and always try my best. I strongly believe in myself and have many dreams for my future.

I consider myself to be very passionate. I love exploring new things and spending time with friends. I work very well with others and enjoy collaborating and socializing. I am proud to be Cambodian, and I respect and cherish my culture, especially the food. Travel is important to me, and so far, my favorite country is Singapore. A huge part of my life is football; I enjoy playing competitively with experienced player, and I am always trying to improve my skills.

I want to go to college and major in Business because I have been interested in this field since I was very young. Currently, I am working with a team from Liger on a bike business that provides tourists understanding of daily Cambodian life and supports the local communities.

I hope you enjoy my portfolio!